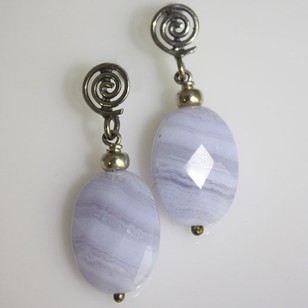 Creatively striped by nature, Agates can have many distinctive styles and patterns, but each Agate is unique, with no two Agates being the same.  A generally accepted requirement of Agate is that it has to be banded. An Agate slab varies greatly and can be made of many colors. Agates are often translucent (or at least contain translucent bands) because they are composed of microscopic “fibers” of microcrystalline quartz. Agate is the Louisiana ‘state mineral’. Agate is often found as a round nodule with concentric bands, like the rings of a tree trunk, because they are formed by filling the cavity of a host rock. This stone is said to be named after the River Achates (now called the River Drillo), in Sicily, where it was first found. Agate deposits can be found in Brazil, Argentina, Uruguay, Mexico, Poland, Botswana, India, Australia, and the United States.

In ancient times, Agate was highly valued and was said to quench thirst and protect from fever. Persian magicians used this stone to redirect storms. It is a cooling stone and is said to offer protection against danger, encourage strength and healing, cure insomnia, and ensure a healthy life.

Blue Lace Agate is also known as the ‘Gem of Ecology’. This stone can be described as having light blue bands in a lacy or wavy pattern.

Blue Lace Agate is a gentle, calming stone that brings tranquility and grace. It is considered a happiness stone from the harmonious energies it carries, as well as one of hope.